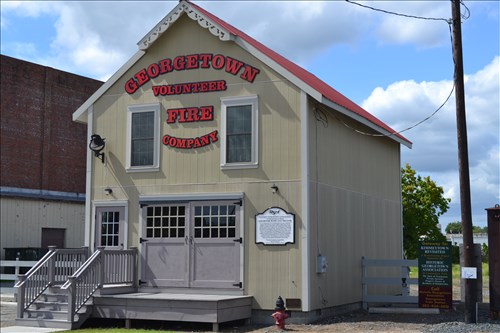 The history of Georgetown’s volunteer firefighters goes back to 1831 when “Georgetown Fire Association” was formed and the first fire apparatus was purchased. The old jail in Georgetown was used to store the apparatus and in 1904 the first fire house was built in the rear side of the old jail on South Race St, between Market St. and “Tincup Alley”.

In 1926, the fire company moved into much larger quarters on the “Square” in Georgetown and the 1904 structure, which has now been preserved by the Historic Georgetown Association, was moved out to the edge of town on Rt. 113. At that location, two wings were added and the structure was used as a Southern States Feed Store.

In 2006, Carlton Moore, President and founder of HGA, learned that the structure was going to be torn down in order to make room for new construction. Although only a few residents knew the significant history of the structure, HGA knew that the preservation of the first fire house in Georgetown was imperative. HGA received permission to move the structure to its present location near the Historic Georgetown Train Station and restoration efforts began.

Based on an old photo of the fire house when it was in its original location, Georgetown’s First Fire House has been restored and dedicated in honor of all Georgetown firefighters-past, present and future. Murals inside the fire house depict in word and pictures the history of “Local 77” and the names of all members, as well as Presidents and Chiefs, are displayed dating from 1904 to the present. In 2014, a dedication plague was placed on the outside front wall of the Fire House in honor of former Governor Ruth Ann Minner for her faithful efforts on behalf of HGA during her years of office.